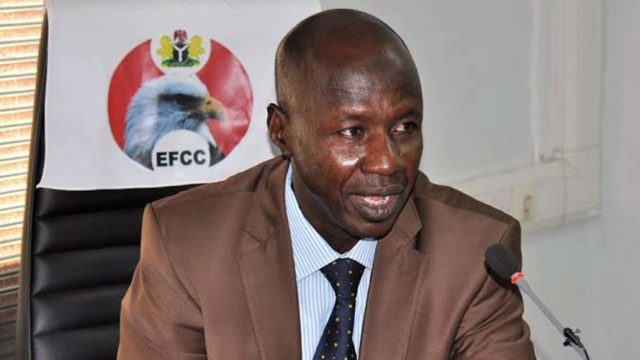 Ibrahim Magu who was one of Nigerian police officer before and he was appointed as Acting Chairman of the Economic and Financial Crimes Commission (EFFC) has been arrested by the Department of State Services.

The acting chairman of EFCC was arrested today 6th of July, 2020 over allegations that he owns four properties and that he was allegedly transferring funds abroad through a third party.

We gathered that he was arrested at the Wuse II office of the DSS on Monday (6th of July, 2020) afternoon and is now undergoing interrogation at the DSS Headquarters In Aso Drive.

In 2016 DSS filed a report against him revealing that the acting chairman is living in an apartment calculated to be be N40m mansion which was paid by one Umar Mohammed, a retired air commodore who is allegedly involved in shady deals.

In December 2010 also, the Police Service Commission (PSC) found Magu guilty of action prejudicial to state security – which is withholding of EFCC files, sabotage, unauthorised removal of EFCC files and acts unbecoming of a police officer, and awarded him severe reprimand as punishment.

More so, we also gathered that Magu is currently occupying a residence rented for N40m at N20m per annum. This accommodation was not paid [for] from the commission’s finances, but by one Umar Mohammed, air commodore retired, a questionable businessman who has subsequently been arrested by the secret service.

In conclusion, it was also gathered that the EFCC boss has so far maintained a high-profile lifestyle. This is exemplified by his preference for first-class air travels. On 24 June, 2016, he flew Emirate airlines first-class to Saudi Arabia to perform lesser hajj at the cost of N2.9m. This is in spite of Mr President’s directive to all public servants to fly economy class.

Ibrahim Magu who was one of Nigerian police officer before and he was appointed as Acting Chairman of the Economic and Financial Crimes Commission (EFFC) on 9th of November 2015 after chairman Ibrahim Lamorde was sacked by President Muhammadu Buhari.

Police charge a man who defaulted on his promise of marrying...

Breaking news: ONE of Enugu State House Of Assembly Member,...

13 members of the Imo State House of Assembly have tested positive for the Covid-19...

I looked at her seductively. Yes I wanted her so badly. She moved nearer to me and...

King Of My Heart

“Sex doesn’t signify love Prisy… I don’t prefer you regretting anything.” he replied....

A bestie committed suicide after losing her boyfriend

May she rest in the bosom of the Lord. And may the Almighty God grant the Arotile...

Must Read: A Chance For Love… Episode 8